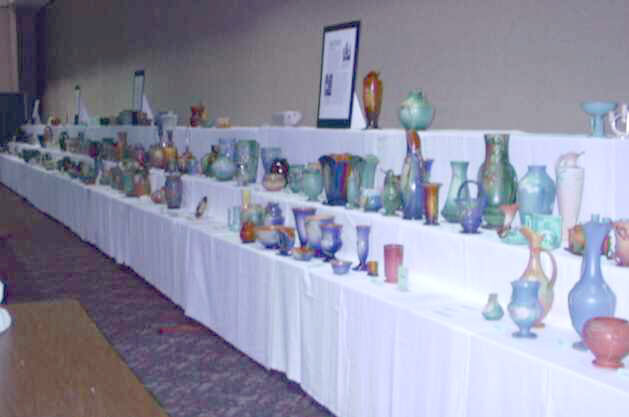 The Wisconsin Pottery Association’s August 28, 1999 Pottery Show and Roseville Exhibit in Madison were successful beyond our most optimistic expectations.

Over 1,250 people attended, due in part to the quality of the dealers selling at our Show, and in part to the Exhibit: Roseville America’s Decorative Art Pottery.

Guests were very pleased with the Exhibit, which included 488 pieces of Roseville representing 157 lines. (The three-tiered display was over 110 feet in length!)

About the Roseville Exhibit

The Exhibit opened with Venetian cookware and Novelties from the 1890s, and closed with an experimental Blackberry dinner plate, Frank Ferrell’s last known design for Roseville executed around 1954.

Roseville authors Nancy Bomm and Mark Bassett attended the Show and Exhibit. Mr. Bassett’s book, Introducing Roseville Pottery, was recently published. It documents previously unknown Roseville products, revises the dates assigned to several Roseville lines, and promises a new approach and perspective for Roseville collectors. Mrs. Bomm, with her late husband Jack, wrote Roseville In All Its Splendor, an extremely useful, informative, and complete guide to the Roseville Pottery. This 1998 book is essential to anyone who wants to understand the breadth of Roseville’s production. Mrs. Bomm quickly sold her entire stock of books at the Show!

The pottery dealers were also happy with sales and with our new facility, the Madison Marriott West. All types of pottery, in all price ranges, sold very well. A few of the pieces we heard about include a 15 inch Haeger Orange Peel bottle vase (sold for $85), an eight inch Roseville Cosmos jardinière-pedestal ($1,900), a large Weller Atlantic vase with incised poppies ($375), a Gort “Prince” figurine ($200), a 1960s Red Wing bud vase ($25), a Roseville Apple Blossom wall pocket in blue ($250), a small Norse Pottery urn ($440), a McCoy 1930s Empress vase ($30), a red and black Italian Raymor goblet ($75), and a pair of iridescent Austrian Amphora vases ($650).

View the Roseville Experimentals Gallery from this show.