Presentation from March 1998 by Dennis Hopp and Nicol Knappen While his work indisputably falls within the mid-century aesthetic standard, it often bypasses the conventions of the era.

The most desirable pieces are those with the full “Sascha Brastoff” signature, because they indicate that Brastoff personally designed and painted those pieces. Those signed “Sascha B” were produced either by decorators under his supervision using his designs, or by Brastoff himself. 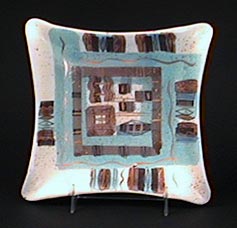 The Collectors Encyclopedia of Sascha Brastoff/ Biography / Identification & Values (Collector Books, 1995) by Steve Conti, A. Dewayne Bethany and Bill Seay is a comprehensive review of Brastoff’s work that is affectionate but somewhat rambling and disassociated.

Award winning Sascha Brastoff pieces are also shown in American Ceramics, the Collection of the Everson Museum of Art (Rizzoli, 1989).

1918
Sascha Brastoff was born Samuel Brostofsky in Cleveland, Ohio, one of eight children

1935
At age 17, Brastoff studies dance with Edward Caton and eventually dances with the Cleveland Ballet for several seasons.

Brastoff joins the Clay Club, 4 West 8th Street in Greenwich Village. The following year there is a sell out one man show of his terra cotta Whimsies; pieces were purchased by the Whitney Museum, the Syracuse Museum and the Metropolitan Museum of Art.

road show. He becomes well known for his comic interpretation of Carmen Miranda, called by theater legend Moss Hart as the “greatest sight laugh of this century.”

1944
Brastoff moves to California and signs a seven year contract with 20th Century Fox as a designer and entertainer.

1948
Six canapé trays entered into a Syracuse Museum competition win Best of Show for Pottery and a $100 award from the Harker Pottery Company.

1952
With backing from Winthrop Rockefeller, Brastoff opens a new, larger factory in Los Angeles. The factory is destroyed by fire after only six months.

1960
Brastoff’s company begins to suffer from financial problems after years of success.

1962
A nervous breakdown compels Brastoff to leave his company, though wares continue to be sold under his name.

1966
After several years away from the public eye, Brastoff opens a one-man show of metal sculpture at the Dalzell Hatfield Galleries in Los Angeles.

1971
Brastoff designs the Espfanade and Roman Bronze lines for the Haeger Potteries.

1972
Brastoff produces a line of jewelry for Marilyn Watson Creations.

1973
The Sascha Brastoff ceramic factory closes after many years of producing his designs.

1975
Brastoff produces a line of jewelry for Merle Norman.

Brastoff designs and produces a myriad of lines for other ceramic, jewelry and decorative arts companies. He experiments with a wide variety of new materials and techniques, including holograms.